Thank you to everybody who contributed to recording in 2015 in Co. Wexford

With the year coming to a close I would like to take this chance to thank everybody who has contributed to recording in Wexford during the year. This has been our best year ever!
For once we have nearly kept up with the inputting of the records collected during 2015. This has been a phenomenal year for the county as to date just over 80,000 records have been entered into MapMate, that is 24,000 up on our best year, which was in 2014. Hopefully 2016 will see an increase in recording in the county, especially in the northern half which is lagging behind, there are still many tetrads with no records or less than 50 species recorded. In the southern half of the county all tetrads have had at least one monad visited, and in the SW corner of the county from New Ross south to the Hook and east ward across to Wellingtonbridge nearly every monad has been visited.  2015 also saw our best ever total of species recorded in a monad on a single visit, 270. This was at Blackwater T1234.

52 new species were added to the county list, of these 10 were native, 35 were garden escapes or dumped from gardens and surviving, and the other 7 are rare casuals. Of the 10 new native species 8 are hybrids.

The map below shows all the monads (black squares) with records. 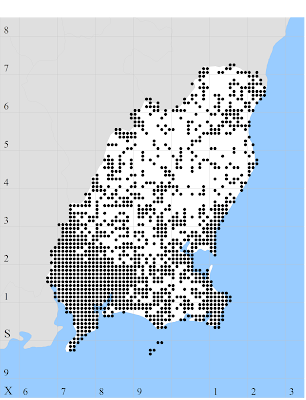 Posted by Wexford Wild Flowers at 07:17 No comments: